You are here: Home / Blog / Business / Nearly Newlywed Net Worth 2021 – What Happened After Shark Tank

Getting married can be an extremely expensive enterprise and the wedding dress is likely to contribute significantly to the budget.

A bride may want the ultimate wedding dress on her perfect day.

But is the expense of the ultimate wedding dress worth the once-off wearing experience?

Jackie Courtney pitched her business, Nearly Newlywed to the Sharks, asking for $35,000 for 10%.

Courtney takes some of sting out of the wedding dress costs, without losing any of the magic and perfection.

Read on to find out how the company is worth an estimated $800k today.

What is Nearly Newlywed?

Nearly Newlywed is an online listing boutique that offers the bride-to-be new, sample, and pre-owned wedding dresses at a substantially discounted price.

Once the magical day is over, the newlywed can sell her wedding dress to Nearly Newlywed, helping to recoup some of the costs of the wedding.

Nearly Newlywed offers a risk-free 5 day return policy on all dresses shipped within the US. Orders shipped internationally are Final Sale items without a return policy.

A comprehensive set of photographs and a detailed description of each dress is supplied along with an objective review, to help the bride-to-be to make a decision.

The website displays the dresses in various categories based on style in order to make finding the ideal dress easier. There is also a super easy-to-use size and fit guide on the website.

Who is Jackie Courtney?

Jackie Courtney moved from a small town in Iowa to New York City where she worked as a fashion publicist.

Courtney noticed that many celebrities borrowed red carpet dresses instead of purchasing them. This started her thinking about developing a wedding dress platform.

Nearly Newlywed became a reality as an online boutique where former brides could sell their lightly-used dresses and brides-to-be could find their perfect dress at a fraction of the retail price. 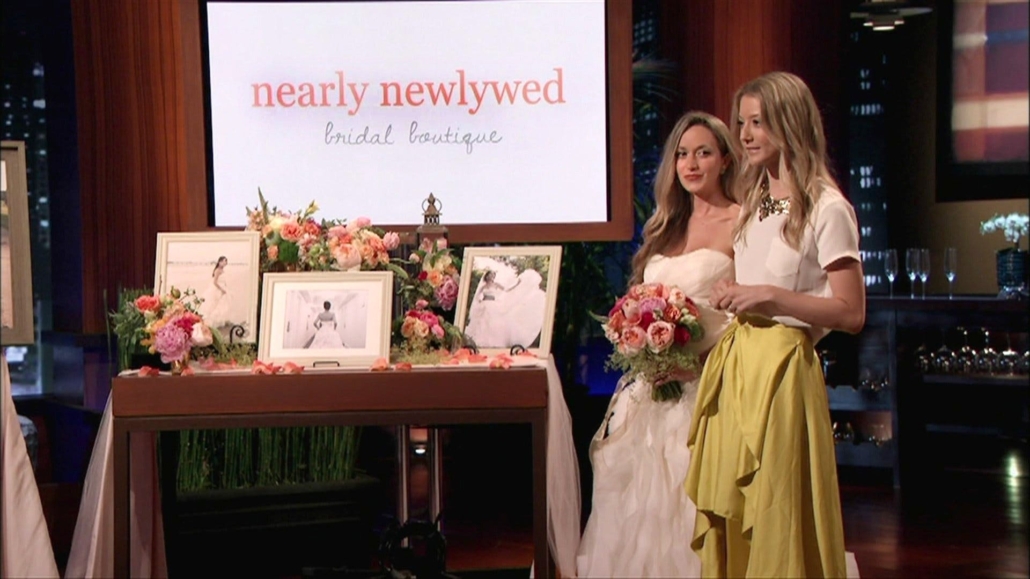 Buy it, wear it, sell it back…sounds reasonable? Jackie Courtney took her Nearly Newlywed wedding dress business to the Shark Tank, offering 10% of the business in exchange for an investment of $35,000.

After introducing herself, Courtney showed the Sharks her website and a few of the dresses featured. She demonstrated a dress that retailed for $11,000 but was selling on Nearly Newlywed for $3,800.

Watch a snippet of her pitch here.

Courtney also demonstrated the sell back option for the former bride to recoup some of her wedding costs.

Robert Herjavec had reservations about the business concept. Didn’t brides want to keep their wedding dresses?

Courtney assured him that this was true in some cases, but in many situations, the wedding dress mentality had changed and former brides were happy to sell their dresses.

The other Sharks understood the appeal, even though Herjavec didn’t understand a bride who would want an already used dress.

Mark Cuban was more interested in how she was going to build her brand. Courtney revealed that Nearly Newlywed had been featured in a number of press reviews in the Washington Post and Mashable.

It was scheduled to be in an edition of Martha Stewart’s magazine.

Courtney also revealed that she was in negotiation to partner with Kleinfeld’s Bridal.

Kevin O’Leary wanted to know how much capital was invested in the business. Courtney explained that since Nearly Newlywed works on a consignment basis, there were very few costs to the company.

On each consignment, the company made 35-40% of the sale, representing a good margin.

Barbara Corcoran liked the idea but felt the fact that Nearly Newlywed has only been open for three months meant the business was too new to take a gamble. She declared out.

Daymond John agreed with Herjavec’s feelings and they both declared out.

Kevin O’Leary liked the business and Courtney’s passion. However, he stated that he would need far more of a stake in the business for his investment.

Courtney turned to Mark Cuban. Cuban advised her that Nearly Newlywed is very press-driven. This and the niche market of the business were not attractive to him. He withdrew without making an offer.

Although Courtney tried to talk O’Leary into a lower equity share, he wouldn’t budge. Courtney decided not to accept the offer on the table.

As is common, after the exposure on Shark Tank, business sky rocketed for Nearly Newlywed. Courtney partnered with Kleinfeld’s Bridal (of Say Yes to the Dress fame).

The Nearly Newlywed website now has hundreds of dresses on offer, discounted up to 90%. More than a million brides-to-be visit the website annually.

Nearly Newlywed also offers a platform to other vendors selling wedding related items, as well as a high-end selection of articles by big names in the wedding industry.

Their Instagram page is a taste of what is on offer on the platform.

Courtney and Nearly Newlywed remain able to make a difference in the lives of cost-minded brides-to-be who want the magic, but understand the practicality of that magic!

Moki Doorstep Net Worth 2021 – What Happened After Shark Tank