You are here: Home / Blog / Business / Nicepipes Net Worth 2021 – What Happened After Shark Tank

Lisa Binderow had a pipe dream while walking during a cold morning in her hometown.

She wanted to create comfortable warm clothing that fitness enthusiasts could wear during the winter months.

That’s when Lisa came up with Nicepipes.

Find out what happened when Lisa appeared on an episode of Shark Tank to ask for an investment in her fitness apparel An d how she has developed an estimated company net worth of over $5 million since the show.

Nicepipes are stylish leg and arm warmers worn by people who do yoga or other active sports.

It’s made from comfortable sweat-wicking material that’s the same fabric used to make yoga pants. Nicepipes comes in a variety of colors to choose from and is said to have UV protection.

Wearers can sport Nicepipes apparel before and after their yoga or fitness workout to keep them warm during winter.

The owner of Nicepipes is Lisa Binderow who is also the founder of the company.

Before appearing on Shark Tank Lisa was a yoga instructor and manager at Yoga Works. She was also a producer’s assistant for two years at Platinum Dunes.

Lisa came up with the concept of Nicepipes while walking to her Yoga class one cold morning. She didn’t want to create leg and arm warmers out of bulky woollen fabrics. Instead, she wanted a light and comfortable fabric – the same fabric used to make yoga pants – to create Nicepipes. And so, she did.

What is Nicepipes Net Worth?

During the Shark Tank episode, Lisa valuated the business at $1 million but her net worth at the time was $80,000.

Lisa is still selling her apparel today and sites such as Owler state that the company’s net worth is around $5 million. 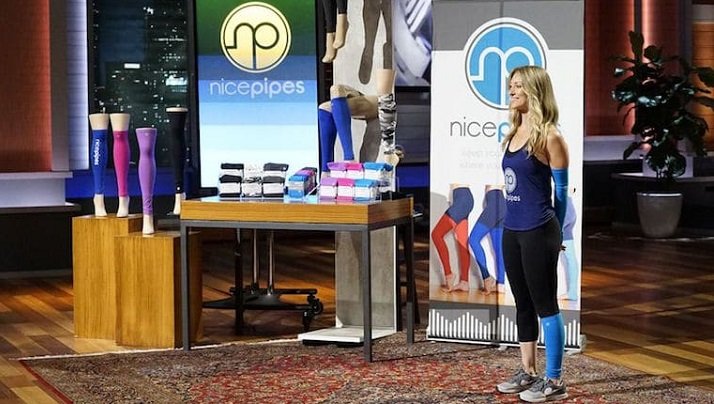 Lisa appeared on season 8 episode 13 of Shark Tank with her Nicepipes invention.

The entrepreneur created leg and arm warmers that wouldn’t slip down while working out and would wick away sweat. Lisa asked for a $100,000 with 10% stake in her company. However, not all the Sharks were impressed by Lisa’s pitch.

Kevin stated that there was nothing unique about Lisa’s fitness apparel. Lora liked the idea of Nicepipes but didn’t think it was worth investing in. Lisa got an offer of $100,000 with a 40% equity in the company by Barbra but Lisa declined the offer.

After the show, Lisa stated in a blog that she realized she didn’t make Nicepipes to become a millionaire. She wanted to solve a problem in the fitness industry. The entrepreneur realized that if she had taken the deal, she would have taken an offer she couldn’t ever come back from.

Even though the deal didn’t go through for Lisa on Shark Tank, she still sells her Nicepipes fitness apparel on her Nicepipes website and through Amazon.

The leg and arm warmers offer many benefits such as mild compression to enhance performance and optimal stretch for a custom fit.

Would you buy Nicepipes leg and arm warmers? Let us know in the comments below.

SoapSox Net Worth 2021 – What Happened After Shark Tank