TONY ROBBINS NET WORTH 2022 – BIO, EARLY LIFE, TONY ROBBINS EVENTS, FAMILY, WHERE HE MADE HIS MONEY, QUOTES AND FUN FACTS

Tony Robbins Net Worth 2022 – BIO, Early Life, Tony Robbins Events, Family, Where he made his money, Quotes and Fun Facts 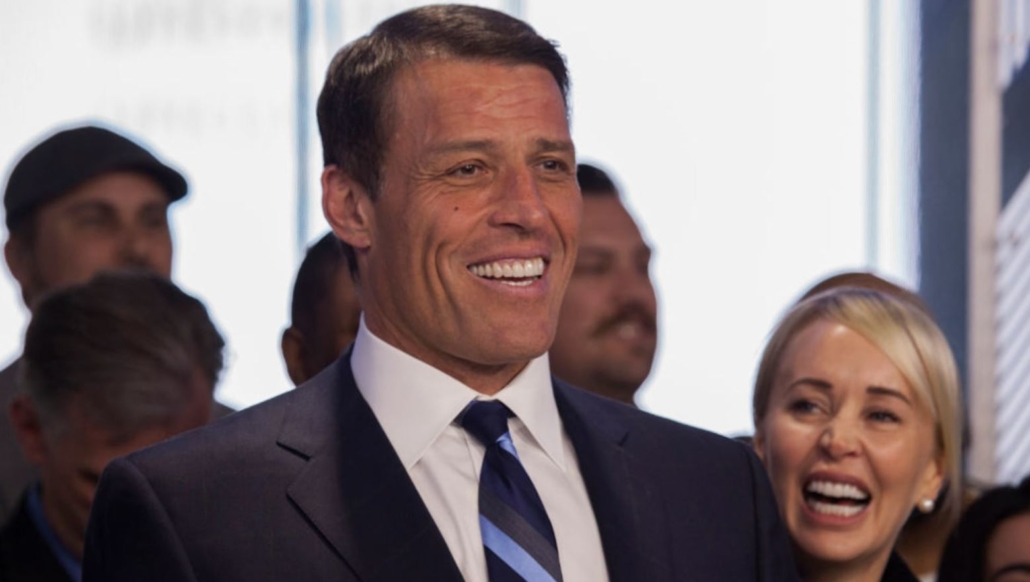 Tony Robbins is one of the great American success stories with a net worth of over $600 million. You have probably already heard of him or maybe even seen him in a movie.

But mostly, what Tony Robbins is known for is changing lives. He is the preeminent self-help guru of our generation.

His seminars and books have touched millions of lives all across the globe. Today, he is one of the most sought out figures by people wanting to learn about both wealth and personal success.

But for such a public figure, Tony does a good job of keeping the details of his life private. Lots of people want to know more about this self-made millionaire but it isn’t always easy.

That’s why in the following article, we will not only be talking about Robbins’s net worth but give you a glimpse into his life. The story of how this man from humble and adverse beginnings lifted himself up, found inner strength and shared that strength with others is one that should be known.

Origins of Wealth and Net Worth

Today, Tony owns 33 companies that rake in an estimated $1 billion in annual revenue. It is estimated that his current net worth is in excess of $600 million, easily making him one of the richest self-help experts in the United States.

But Tony’s origins were very humble. He always had an interest in self-help speakers such as Jim Rohn. 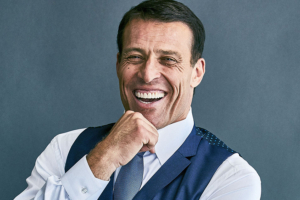 In fact, in the early 80’s Robbins actually secured a job promoting Jim Rohn’s events and public appearances. This was the start of Robbins’ own self-help empire.

Jim would soon develop a partnership with John Grinder; an early proponent of Neurolinguistic Programming or NLP. The two began giving seminars on NLP and Tony even created his own branch of the practice called Neuro-Associative Conditioning.

And in 1983, Tony Aired his very first infomercial – a platform that he would become known for in subsequent years. Ever since 1985, his promotional work, infomercials and seminars have netted him at least a million dollars a year.

The world-famous self-help guru and author started life as Anthony Mahovoric. But when his parents divorced when he was 7, his mother remarried a number of times before marrying Jim Robbins.

Jim and Anthony developed a close relationship and when Anthony was 12, Jim officially adopted him and Anthony took on his name which is why today, he is known as Tony Robbins.

The family relocated to Azusa, California where Tony attended Glendora High School. While in high school, Tony developed a pituitary tumor which resulted in a 10-inch growth spurt, accounting for his considerable stature which he has also become known for.

The event had a major impact on Tony’s life. His health condition, along with growing up in a poor household would motivate him to do what needed to be done to better his circumstances – a philosophy that would become the cornerstone of his teachings.

Throughout the 80’s and early 90’s, Tony Robbins’ reputation continued to grow. People from all over the world would come listen to him speak.

The popularity of these seminars was the backbone of Tony’s income and helped make him a millionaire. And it continues to expand his fortune to this day.

Tony Robbins has been married twice and has 4 children. His first marriage was to Rebecca Jenkins.

Rebecca had three of her own children from a previous relationship whom Tony adopted, legally making them his children. In 1984, Tony learned that he had fathered a child with an old girlfriend named Liz Acosta. 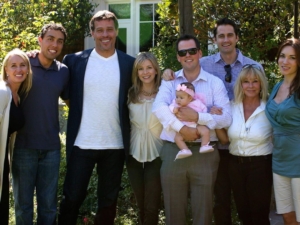 Tony Robbins’ events have become known for grandeur and spectacle. One of the signatures of his energy-charged live events is fire walking.

Tony had learned fire walking (walking across burning hot coals with bare feet) from Tolly Burkan in 1983. He later incorporated the act into his live events, encouraging attendees to conquer their fears and do what they perceived to be impossible.

Today, Tony Robbins’ regularly draw crowds of 10,000+ people. And while the COVID-19 pandemic has limited live events greatly, he still offers live virtual seminars. Some of his most popular seminars include:

Tony Robbins has composed a number of video courses over the years that are also very popular. Many of the courses coincide with his seminars – teaching people how to realize their own potential, take control of their finances and how to become a leader.

Some of the most notable Tony Robbins courses include:

Most of Tony Robbins’ courses are available to view/listen through a mobile app or CD/DVD. They can also range in price between $250 and $1,500.

Tony has authored a number of self-help and personal message books. In 1986, he co-authored one of his first books with Joseph McClendon III entitled “Unlimited Power.” Some of his best-selling books include “Awaken the Giant Within,” “Unshakable” and “Unleash the Power Within.”

Tony has a well-known love for aviation – purchasing his first private jet in 2015 which is considered to be one of the most lavish and extravagant private jets in operation.

He also owns 33 businesses including ventures in technology, sports and even a resort and spa in Fiji.

In many of his teachings and quotes, Tony promotes the value of both honesty and prayer. In his personal life, he states that he devotes 3 minutes of every day to prayer. 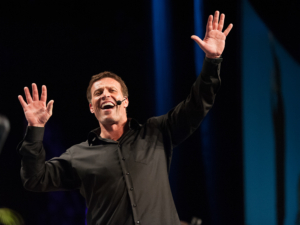 Some of his notable quotes include:

“The power of positive thinking is the ability to generate a feeling of certainty in yourself when nothing in the environment supports you.”

“What makes a relationship work is things in common, what makes it passionate is that things are very different.”

Tony Robbins has inspired millions of people over the course of 3 decades to become better people. His own story is a source of inspiration for people who want to overcome the odds.

If you have never read one of his books or heard him speak, take the time to do so – it could change your life.